Nonlinear normal modes (NNMs) represent the analogue of linear normal modes (LNMs) for nonlinear systems. Although NNMs do no have some of the key mathematical properties of LNMs (such as orthogonality), NNMs share a number of important similarities with LNMs and proved useful to explain a number of nonlinear phenomena (modal interactions, localisation, energy transfers, etc.) One key similarity between NNMs and LNMs is the possibility to test a physical (damped) system and directly measure the NNMs of the underlying conservative system. Another similarity, directly related to the previous one, is the defining role that NNMs have on the frequency response of the nonlinear, damped system. In fact, NNMs usually describe well the dependence of the resonance frequencies of a system in function of the amplitude of oscillation, tracing out the so-called backbone curves.

In the context of nonlinear modal analysis, I  specifically work on:

This paper reviews the recent advances in computational methods for nonlinear normal modes (NNMs). Different algorithms for the computation of NNMs for undamped and damped systems are presented, and their respective advantages and limitations are discussed. The methods are illustrated using various applications ranging from low-dimensional weakly nonlinear systems to strongly nonlinear industrial structures.

Evidence of Modal Interactions in a Spacecraft Structure

Interactions between modes are not just mathematical curiosities and were observed on a number of physical systems, including real-life industrial structures such as the SmallSat satellite presented in Figure 1. In the papers below, the modal interactions observed experimentally were captured numerically by the NNMs of the system. 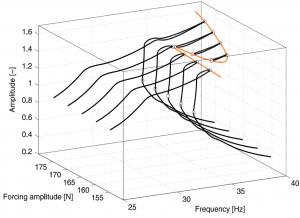 Families of isolated periodic solutions are frequently observed in the frequency response of nonlinear systems. Detached from the main resonance peaks, such solutions can hardly be observed using conventional simulations such as sine sweeps. Similarly, they are very difficult to observe experimentally. The presence of these isolas can lead to a significant underestimation of the response amplitude of the system at a particular excitation level.

This paper uses NNMs and an energy-balance technique to unveil the presence isolas. The proposed method allows to estimate the parameter values at which isolated solutions are present; estimates that can in turn be exploited by algorithms such as numerical continuation to capture the family of isolated solution.

The most popular definition of NNMs is arguably the one that defines NNMs as periodic solutions of the conservative equations of motion. A concurrent work, which allows to extend NNMs to nonconservative (damped) systems, defines NNMs as two-dimensional invariant manifolds in phase space.

The first paper presents a finite-element-based method that can compute NNMs defined as 2D invariant manifolds for a wide range of (un)damped systems. The method relies on an explicit parameterization of the manifold and grows the surface as a collection of annular regions. However, the invariant manifold can a priori have a very complicated geometry including foldings; in which case an explicit parameterization fails. The second paper overcomes this issue by computing a NNM as a collection of trajectories in phase space. The third paper uses the theory of Koopman operators to provide a ‘global’ parameterization of the surface and its approximate expression in terms of a polynomial expansion. 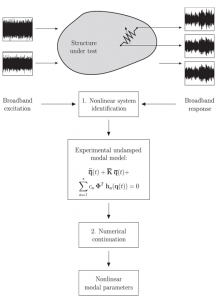 In linear modal analysis, the term phase separation usually refers to a range of mathematical techniques used to post-process experimental data and identify simultaneously multiple modes, separating their individual contributions from the data.

The first paper below extends this concept to nonlinear systems and proposes a nonlinear phase separation method that can extract multiple NNMs from broadband data collected during a single experiment. The method is demonstrated on numerical data collected on a structure composed of a clamped-clamped linear beam including a nonlinear spring. Time data were artificially corrupted with noise. The first experimental demonstration of the method was presented at the IMAC XXXV (second paper).